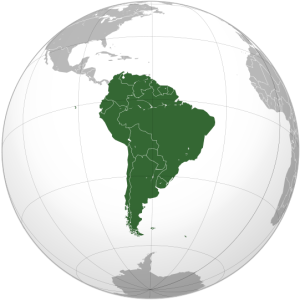 Hello! We are Marina and Jack, a couple from Brasil and Ireland. We’ve been living in Dublin, Ireland since 2011. In 2016, we’re starting a “Grand Tour” to South America, and hopefully beyond!

For the last few years, our hobby has been travelling together around Ireland and Europe, and trying to do it on a budget.

Many people have a dream to travel the world, we didn’t want to be overconfident so we just picked one continent instead 😉

After living in Dublin for a few years we both needed a change, and we’re hoping we will discover some places along the way that might inspire us in the future.

We’ll start our trip in Marina’s home town of João Pessoa, in the northeast of Brasil. After travelling a bit in the north and northeast, we’re going to travel south along the coast, stopping for a few days or weeks in the major cities, national parks, and landmarks. After Brasil, we’ll stay in Buenos Aires, Argentina, and decide where we’ll go from there.

How did you prepare?

We saved for more than a year, and towards the end of our time in Ireland, we sold the majority of our belongings to fund the trip.

We mainly used adverts.ie, along with a day at the Dublin Flea Market. It took longer than you’d expect, but at the end of the day it was worth the effort.

There was also plenty of “admin” before going such as getting an international driver’s licence, vaccinations, settling accounts and bills, all the boring stuff you’ve got to clear up.

What’s the blog for?

Primarily we’ll use this to keep friends and family posted on our progress, but ideally it’ll become a useful source of information for other travellers who might consider doing something similar in the future.

4 thoughts on “Our Trip”