Our travels through historic Minas continue. After a day at the Inhotim institute south of Belo Horizonte, we continued south that evening. Into the hilly darkness off the main BH-São Paulo motorway, and up to Tiradentes, where we’d spend two nights.

Named for the leader of a failed 1789 rebellion against the Portuguese empire, it’s small, full of churches, and very touristy. The name “Tiradentes” in Portuguese means “tooth puller”, that revolutionary’s former job, before he became involved in politics. We visited during a national holiday, coincidentally April 21st, the “Dia de Tiradentes” which commemorates this Brazilian hero’s execution date. Surprisingly, the town wasn’t completely full for this, as everyone had gone to Ouro Preto instead, there was an event on for the day.

We basically strolled around for a day, which is sufficient to see everything. Marina desperately wanted a birthday cake, as I hadn’t supplied one in previous years, so we also made a supermarket stop to pick one up.

The churches are the main attraction in all of the historic Minas Gerais towns. In Tiradentes we found some of the more memorable places to be nearby, but less well signposted. 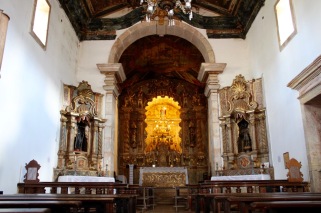 There’s the shop that sells art based on the Möbius Strip (A 3-dimensional object, but with only one edge, and one side).

There’s the house, looking fairly ordinary, hosting a collection of some of the world’s best modern art- paintings by Dali, sculptures by Rodin, and more. You don’t need to pay, and you’ll even get a personal tour.

There’s a fountain, presumably once used for watering horses, now a good-luck charm. You have to drink from each of the three taps, to be protected from bad luck. So far, so good. Did it work for the horses too? 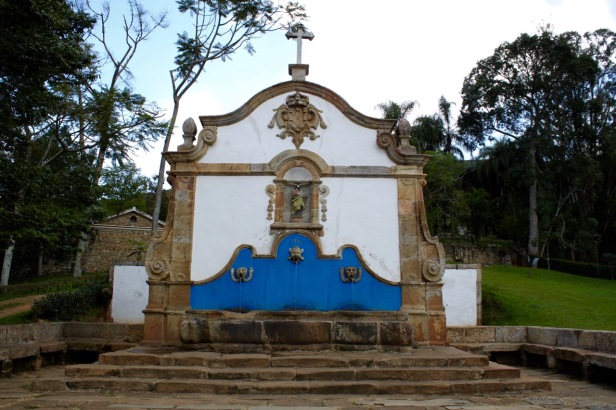 Behind the fountain, a mini aqueduct carries the water down from the mountain. We followed the trail up, until a sign ordered us to stop:

The main square has various pubs, restaurants, wine bars- actually Tiradentes is a bit of a food paradise, with several famous restaurants. According to Guia4Rodas, the Brazilian equivalent of the Michelin guide, Tiradentes has more starred restaurants per person, than any other town in the country.

On the other hand, why go to an expensive restaurant, when the fun is often elsewhere. Down a side street, a smoky bar/tobacco shop. The local patrons invited us to join them, and we got chatting. A pair of interesting characters, along with the barman, and loitering outside a bearded old man, peering at us occasionally from beneath a white Panama hat. Not just anybody – a former cartoonist for Mad Magazine! Look out for our faces in an upcoming issue. To honour our visit, and as the first Irishman to grace this bar with his presence, I was honoured to receive a bottle of their finest discount cachaça as a parting gift.

Minas Gerais is full of trains- they’re famous for their old steam locomotives, and for their phrases – in Minas, only in Minas, the word “trem” (train) means, “thing”. A real train is a “trem-de-ferro” or “iron-train”. In Tiradentes, they have a living, fire-breathing 1912 steam train, which does a tourist trail between the town and another nearby. The station keepers and various attendants keep her in top condition, Maria Fumaça, “Smoky Mary” is a symbol of the town.