On May 29th, we reached the halfway point of our journey through Brazil. The 13km long Niterói bridge carried us across and above Guanabara bay, into the heart of Rio de Janeiro. We all know the famous images of Rio – Christ the Redeemer towering over the city, the domed Sugarloaf mountain, and the white sandy beaches of Ipanema and Copacabana. It’s no surprise that the city, and its landscape as a whole, have been recognised as a UNESCO world heritage site.

So it’s hard to write anything about Rio that hasn’t already been written a million times before, isn’t it? Of course not. This city is ever-changing.

In 2016, Rio will play host to the 32nd summer Olympic games, so during our visit, only about 3 months before the start of festivities, the city felt like a gigantic construction site. The Olympic park itself was mostly completed at this stage, but all around it, new motorways are being installed, new bridges and tunnels completed, and all the chaos that normally entails.

We first stayed in a friend’s apartment in Barra Tijuca, an affluent suburb to the southwest of the city proper. From there we had a good chance to get into the Olympic park itself, and watched one of the test events, men’s handball, for free! The handball I can’t comment on, but the buildings are great. Lots of wood seems to be used in the construction, so it comes with a bit of an eco-futurist feel. 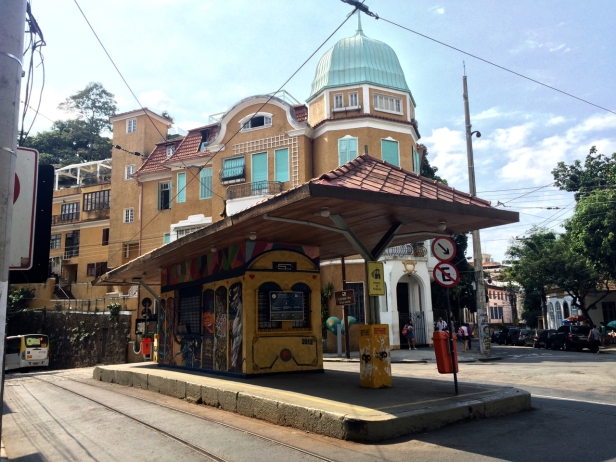 Next stop, the famously touristy neighbourhood of Santa Teresa, right in the centre of Rio. Marina’s sister is living here while studying for a master’s degree, and she kindly offered us a space to stay. The price: a few buckets of paint and our long arms, while we painted the room. (She’d just moved in). Julia shares the apartment with Victor, a photographer from Espírito Santo, and Saskia, a visiting German student of sociology. 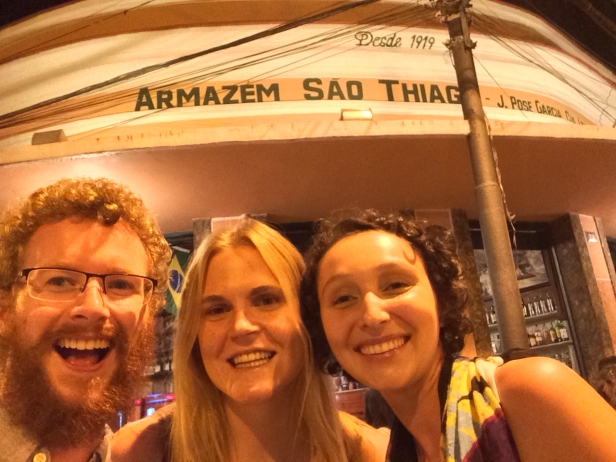 The main street, near Largo do Guimarães, has restaurants and bars of all sorts, it’s packed almost every day. We sat in on a music session in Mike’s Haus, drank in the historic Armazém São Thiago, and met an old friend again from way up north in Chapada Diamantina! Hello Sara!

Up the hill a bit, there’s the closest high point, Parque das Ruínas. From here you can see all across the bay, and tick off all the landmarks, one by one. Next door, is Museu da Chácara do Céu, a modern art museum with another great view.

Santa Teresa is well known for it’s tram, the yellow Bonde that has run up and down the hills here for over a century. It’s actually free to use at the moment, which came as a bit of a surprise. You don’t need a ticket – just get on anywhere it stops! This part of town has steep, narrow, cobbled streets. It’s got a lot of foot traffic, but not somewhere you’d want to spend your time driving around. More than once we almost got ourselves stuck in some awkward alleyway with a bus coming the other way. Separated somewhat from the heavy traffic down in the centre, you’d expect it to be quiet, mostly. That silence was punctuated rather frequently by the BOPE training centre, just over the hill. These friendly folks are the police special forces, heavily armed, and frequently criticised as a “death squad” by numerous commentators. Many a quiet evening was mildly interrupted by the rattle of semi-automatic gunfire.

Time to get down from Santa Teresa, into the heart of Rio. Down to the old harbour, where a dramatic new building took shape, just last year. The Museu Amanhã, (Museum of tomorrow), looking like a cross between”a solar-powered dinosaur and a giant air conditioning unit”, according to The Guardian, is an impressive sight no matter how you look at it. We weren’t sure what to expect – is it a science museum? The technology of tomorrow? No. It’s a museum with a message, and the message is STOP WRECKING THE PLANET. Climate change is real, it’s happening now, and we need to do something about it.

Nearby we visited the Royal Portuguese reading room- a reminder of Rio’s imperial past. Between 1808 and 1822, the capital of the Portuguese empire moved from Lisbon, to Rio de Janeiro, to escape Napoleon’s Peninsular war. This is the only time (to date!) a European country has been ruled from the Americas. Well, almost the only time…

After the Portuguese empire, came the Brazilian Empire, and then the first Republic. In the late 1890’s, Rio was a dominant port for the world coffee trade, and it’s upper class enjoyed meeting to discuss business in the Colombo Café. It’s worth a visit today, to see the enormous mirrored walls (imported from Belgium) and try a fancy coffee at one of the many tables.

On the way back to St. Teresa it’s easy to pass by the Arcos de Lapa, and the multicoloured tiled stairs, the Escadaria Selarón. The Arcos were originally built as an aqueduct, before they began to carry the Bonde tram down into the centre. They indeed have a very roman feeling of permanence to them. They were being repainted in brilliant white, during our visit. The stairs, while well worth a look, are crawling with tourists, photographers, and occasionally a set for music videos!

Coming soon: part 2, where we go for cocktails and find Jesus.