Our first time in northern Brazil – Marina’s first visit too! It’s strange, but most Brazilians don’t know the north of their own country. Even for them, Amazonas seems like an obscure, unknown and exotic place. Many say it’s too expensive, or too dangerous. Would it be for us? It depends on the type of trip you’re willing to do. After plenty of research on where to start, we chose to base ourselves in Manaus. From there, we would explore some nearby towns, and take a few days trip into the jungle. Nine days in all, time enough to explore the Amazonian culture, but it left us wanting more. The north is a world apart from the Brazil we know, rich and unusual foods, culture, music and colours. Almost all new to Marina and I, every day a new discovery. Fascinating!

The question of how to actually get to Manaus was always the first thought, so when searching airline tickets, we found that the cheapest and most direct flights are always from Rio or São Paulo. So flying from Rio, we got our return flights fairly cheap. We left the car somewhere safe, packed our bags and headed towards the Amazon!

After a short bus in from the airport, we stayed at “Hostel Manaus”. Close to the centre, clean and bright. Unfortunately for Marina it was 100% foreign guests, so if you’d like a more “authentic” local experience it may not be the best place. The hostel offers tours into the forest organised by their own agency. However based on some recommendations, from TripAdvisor and some Germans we met in a bar, we instead went with “Gero Tours”. In the end we got an all-inclusive booking, 4 days and 3 nights in the forest (meals, transport, accommodation, guides and tours). With that booking out of the way, we had the time to go see the city, and buy a few bits and pieces we’d need out in the jungle.

We had a lucky chance encounter on our first night in town, right in the middle of Manaus, in an unremarkable local restaurant. We had the honour of meeting the writer Thiago de Mello. He worked with Pablo Neruda, and is best known for his poetry over many decades. In fact he’s one of the most renowned writers from Amazonas. Of course we found out all this on Wikipedia, while waiting for him to return to our table. A 90 year old man, very well dressed, extremely polite and generous. A man with a big heart. Even more than that, he bought us our dinner, and gave us a gift, a signed book of his works. We couldn’t have expected it, it’s not every day you have an encounter with a celebrity!

So, what else did we do in our two days in Manaus? 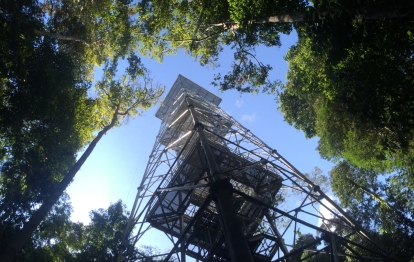 MUSA – The Museum of Amazonas, is a huge open-air museum, attached to the city’s botanic gardens, and part of a larger forest reserve, about 45 minutes by bus north of the city centre. Here, you can learn about the forest, the multitude of animal species, trees, and indigenous tribes than inhabit the Amazon. With many trails to follow, guided tours, bird-watching and pavilions full of information, you could easily spend a whole day there. It’s one of the few places where you can see the forest from above, in a 45 metre tower they’ve built. By coincidence we met the director of the Museum, at the front gate. He told us about the construction of this museum as part of a larger project to protect the area, and how it’s often difficult to find investment, despite so much money being available to exploit these natural resources, for mining or farming. Well worth a visit, give yourself the whole day. 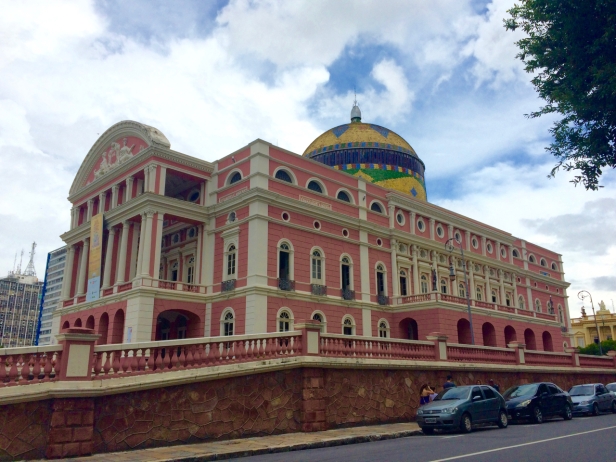 The Amazon Theatre – one of the city’s richest and most famous buildings. It’s a copy of the Paris opera house, built during the 19th century rubber boom. Originally, as an ostentatious symbol of the city’s wealth, the streets around the building were paved with rubber, to mask the sound of approaching horse-drawn carriages. Today, one section remains, and the difference is remarkable. Guided tours are available, but check the show schedule ahead of time, as we unfortunately weren’t able to see any performances ourselves.

A shop & cooperative market, across the square from the theatre, is one of the best places to buy souvenirs. They work directly with tribes, helping them to market their works. A beautiful store, with surprisingly reasonable prices. Don’t be put off by the front window!

For regional foods, you can try something new every day, you’ll never run out of choices. So many fruits, with strange colours, flavours and shapes that you can’t even imagine. Tacacá, a type of strong soup, is a local delicacy. Tucumã, Açaí, and Cupuaçu fruits all have very strong tastes. The first time, it’s almost a bit too much. A street wagon we came across was selling more than 5 fruits we never knew existed. Camu-camu, peach palm, rambutan, Bacuri, and more. Rambutan is originally from Asia, but now grown in Brazil too. Tastes a bit like lychee? The most famous local fish is the Tambaqui. It’s served in every restaurant, with tender white meat, and thick ribs. Arapaima, another giant, with beautiful skin. There are many more, it’s hard to pick a favourite! 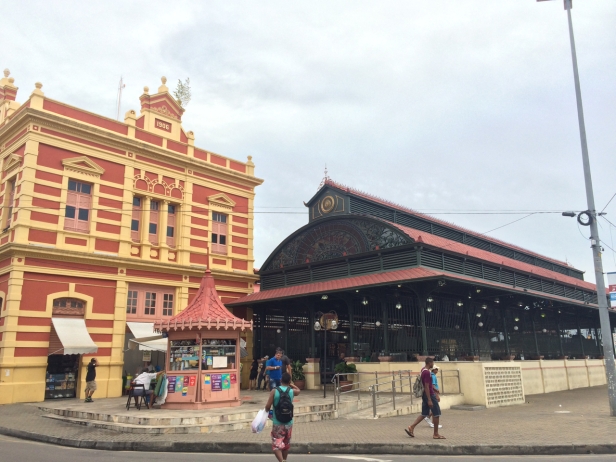 The central market, down by the port, opens at 5am. If you want to pick up some fresh fish, it’s the best place to go, but arrive early! They’ve also got plenty of local crafts, snacks and fresh Açaí to try. Most of Brazil eats processed Açaí, which is more like an ice cream sorbet. The fresh version is less sugary, and usually eaten with crunchy corn crumbs.

In terms of transport, the city is easy enough to get around. In the centre, you can do everything by foot. We took buses only to get to MUSA, and back to the Airport. People at the bus stops were more than willing to help us on our way. A few streets are major hubs for buses – ask anyone and they’ll give you directions.

After the bustle of Manaus, the biggest city in the state, it was time to head off to the forest. 4 days of adventures in the semi-wilderness, without internet of course! An amazing experience awaits!