Where’s the longest beach in the world?

Brazil. Of course! The vast sands of the Cassino Beach, stretching from a little bit north of Rio Grande, to more than 254 km down to the Uruguayan border at Barra do Chuí. Sandy. Long. Flat. So flat, in fact, you can drive your car on it!

Back in Passo Fundo, we’d met Caio through couchsurfing. A few years back he and his friend Diego had travelled all the way to Ushuaia and back. So now we were going to stay with Diego for a night to get his side of the story. His family have a house in Cassino, and he offered us a place for the night.

We made the most of the local amenities!

Gangs of dogs parade up and down the beach, chasing cars and looking for anyone to give them some attention. They weren’t in bad condition given the time of year, although food must be hard to come by, as there are so many of them. Literally every street corner at the beach had one or two, or ten, roaming around. They followed our car (as you see in the video!) until I got out and shooed them away.

The dogs and the wading seabirds appear to have agreed a truce- they leave each other alone to their business, enjoying the last of the evening light.

Our last night in Brazil, and fittingly, we spent it with a beautiful sunset, on a long sandy beach. After tonight, we wouldn’t be returning to Brazil until next year, after spending so many months driving south. Along the way, Marina and I have met so many people, seen so many places, and had so many amazing experiences. We can’t thank enough all the people who have helped us along the way, opened their homes to us, and given us encouragement when we needed it. So with the cold setting in, we settled down for the night, ready for whatever was coming next. 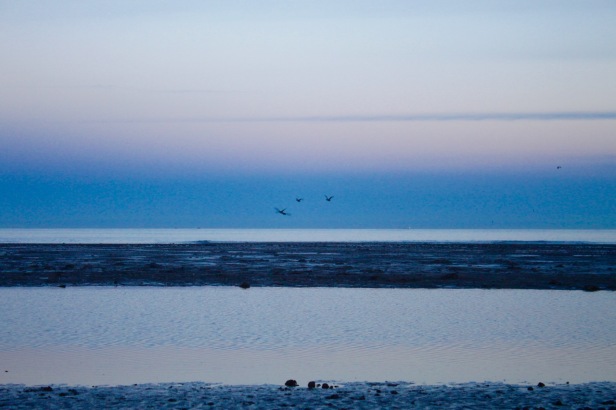 Next morning, a more sombre trip, through a remote, barren landscape. Behind that enormous beach is hundreds of kilometres of featureless farmland, marshes, and dead capybaras. In what’s supposed to be an ecological protection station at Taím, speed limits are not enforced or monitored. The unfortunate animals who get in the way on this road don’t stand a chance.

But as you see in the clip above, it’s not all bad. We were joined by Maxwell, a hitchhiker, for the last hour of our drive to the Uruguayan border. He works as a welder at a factory, producing the support structures for wind turbines. We learned that this part of Rio Grande do Sul is home to Latin America’s biggest active windfarm, which we paid a visit to after lunch.

We completed our border formalities just before the town of Chuí, the last place in Brazil. It turned out I had a lot more time left on my tourist visa, but more on that in another post.

Barra do Chuí is very nearly the most southerly point in Brazil, beaten only by a tiny strip of land along a riverbank nearby. We still felt like we’d accomplished something, just getting here, to the end of the world. There’s a lighthouse here, run by the Brazilian navy- but it was closed to visitors when we showed up.

We drove on, we crossed the frontier, and ticked off another country on the list.

The Uruguayan customs and immigration officers were a lot more thorough than we’d come to expect from other places, they were very insistent on all documentation being absolutely in order, and they’re right too. You wouldn’t want just anyone getting into Uruguay! I was asked, for example, “Do you like the Queen of England?”. “Of course not”, I replied. 🇮🇪 Entry permitted.

Next stop, the wonderfully welcoming little town of Punta del Diablo, where we’d spend the rest of the week in absolute luxury.

Interestingly, a section of the road from that border also doubles as an aircraft runway!